The shepherd’s pie is a comfort food well enjoyed by many. Beef and vegetables cooked in gravy, then topped with steamy mashed potatoes, and baked until a golden crust forms on top – it is a dish that’s both hearty and healthy!

There are so many variations to the shepherd’s pie that I wondered if Korean flavours would work with this traditional fare. And it did!

Sweet bulgogi beef, punchy kimchi and fresh spring onion paired with pillowy mashed potato turned out to be such an awesome combination. And I’m sharing this recipe for you to try!

There are two parts to this recipe: (1) mashed potatoes, (2) beef bulgogi and vegetables. 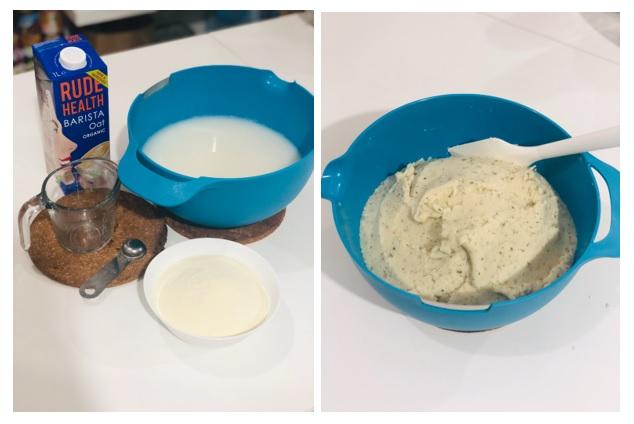 Preparing the beef and vegetables

Bulgogi-marinated beef is readily available in Korean stores nowadays. However I preferred a certain brand of Korean marinade so I just purchased 500 g of beef sirloin, then marinated this overnight. The next day, I gave it a rough chop and cooked it in a pan with some sauteed chopped onions.

To prepare the kimchi, I drained the liquid prior to giving it a rough chop as well. Lastly, the spring onions were washed and towel-dried, then thinly sliced.

Once all of the components have been prepared, it’s assembly time! I tried to make single-serve portions as well as the traditional baked-in-dish shepherd’s pie.

I used ice-cream scoops to make equal portions of mashed potato. Then I made an indentation in the middle and filled it with the beef, and a pinch of kimchi and spring onions.

I placed each ball of shepherd’s pie into cupcake liners, then topped it with egg wash and a sprinkling of toasted sesame seeds.

I baked this in a preheated oven at 400 F (200 C) for 25 minutes and here’s the final product! The top is a little crunchy but below is the steamy mashed potato that I love.

I find it very practical for lunch boxes, snacks, or meals not taken whilst sitting down. And the portion was also perfect because I let my neighbors try it and they loved it.

After making 12 single-serve balls of mashed potato, I still had lots of ingredients left so I decided to cook it in a glass baking dish so that we can appreciate the layers more. And I also thought it makes for a more photogenic dish.

I layered the beef, kimchi, spring onions, and mashed potatoes.  Then I also baked this in a preheated oven at 400 F (200 C) for 25 minutes. And it turned out amazing!

Should we add more potatoes to our diet?

I highly recommend it! Potato is a source of unprocessed and healthy carbs that provide fuel for our activities every day. They contain minerals such as iron, and calcium, as well as vitamins such as Vitamin C and Vitamin B6, all of which work together to support our body’s metabolism.

I also love how it is loaded with potassium to counteract the sodium that’s present in most modern foods that we are consuming. Excessive amounts of sodium increases blood volume, consequently increasing blood pressure, and we all know that’s bad. Potassium-rich diets gracefully ushers surplus sodium out of the body.

Variety makes food fun and healthy! That’s why it is good for you to explore different flavors, cuisines, and food preparations using versatile ingredients – like the healthy potato. Try out this recipe and tell us what you think by tagging @juliannemalong and @potatoesusaphl.